Sanlorenzo Superyacht continues its march forward with new sales, a number of deliveries and the contemporary construction of three new units for the 52Steel, 62Steel and 44Alloy models 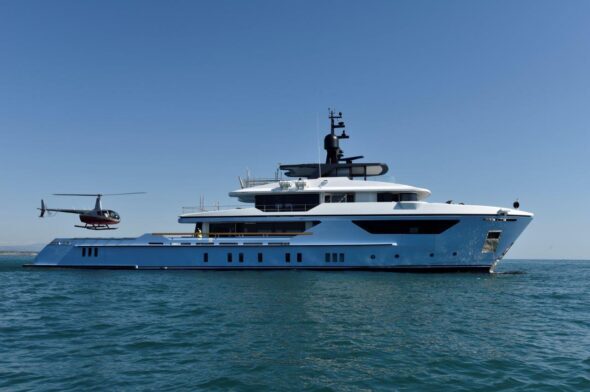 Innovation and creativity in continual evolution, the highest level of customisation available and the singular skill of breaking the rules, all while still remaining recognisable. These are the ingredients that have allowed Sanlorenzo to stand out as the top monobrand shipyard in the world in the manufacture of yachts over 30 metres.

The emblem of this approach is the 500Exp model, an elegant and advanced interpretation of the Explorer range with continues to be successful through the sale of a ninth unit, a 47 metre superyacht, completed by Simpson Marine, Sanlorenzo’s brand representative in Asia. The new unit will be delivered in 2022.

An evolution of the 460Exp, the 500Exp model stands out for it aesthetics, liveability and excellent performance during navigation. We saw one of these models during the summer in roads off Punta Chiappa.

The imposing external design recalls the profiles of the large exploration vessels, leaving the stern deck free to house tenders, or even sail boats up to 9 metres or, depending on the owner’s desires, a seaplane or submarine, space that is unthinkable for other yachts of the same size. The lower deck, instead, has a beach club equipped with a bar that , thanks to its opening and collapsible hatch, also becomes a terrace overlooking the sea transforming into a garage to house a tender of up to 7 metres. 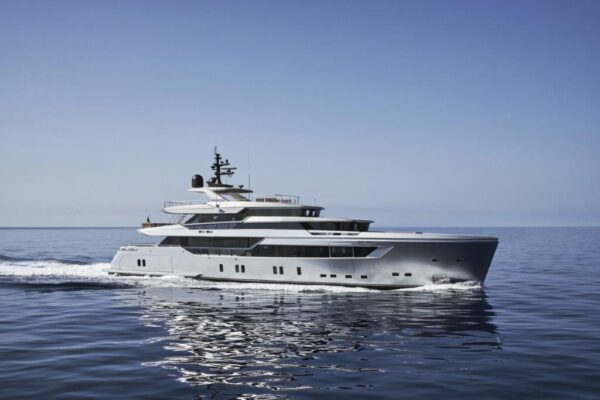 Large interior and exterior spaces with a focus on maximum comfort come together in the 52Steel, an exceptional model with 5 decks under 500GT, much appreciated by the international public thanks to advanced solutions that have recognised the vessel with a number of prestigious awards.

Among the revolutionary elements of the 52 Steel is the entire stern area: on the main deck is a pool with a transparent bottom, allowing the light to come through to the rooms underneath, an exclusive beach area that is carved out through the opening of the hatches on three sides, which turn into a small beach area on the waterline. The same area can be quickly transformed into a flooded garage for the owner’s tender: the floor of the beach area lifts to leave space for a room which can house tenders of up to 8 metres in length.

Careful attention on the liveability of the interior and exterior spaces and their relationship with the sea, brought to an apex through the use of the latest solutions, make the new 62Steel and 44Alloy superyachts stand out, the result of continued research done by Sanlorenzo in order to always offer the highest quality of life on board.

The new Sanlorenzo 44Alloy is a fast-displacement model, 44.5 metres long, made completely in aluminium, presenting an original layout offering the most eurhythmics between the indoors and outdoors. The owner’s cabin, the fulcrum of the design concept, has been created to be a 147 m2 private apartment, divided over three levels with an indoor and outdoor area, and a private pool, something new on a superyacht of this size.

With an overall length of 61.50 metres, a maximum beam of 11.90 metres, a tonnage of 1280 gross tonnes and five decks, even the new Sanlorenzo 62Steel offers surprising solutions. Thanks to the ample spaces, an innovative layout and advanced technology, it guarantees exceptional comfort and on board liveability, typical of larger yachts.

A singular concept which finds its maximum expression in the spaces of the vast and sumptuous owner’s apartment, in the large main room and a majestic Beach Club on the Lower deck. The owner’s apartment on the bow of the upper deck, the Owner Deck, extends for 215 m2 of which 75 m2 are covered and divided into a sleep area, studio, two spacious bathrooms and a walk-in dressing room and 140 m2 open to the bow. 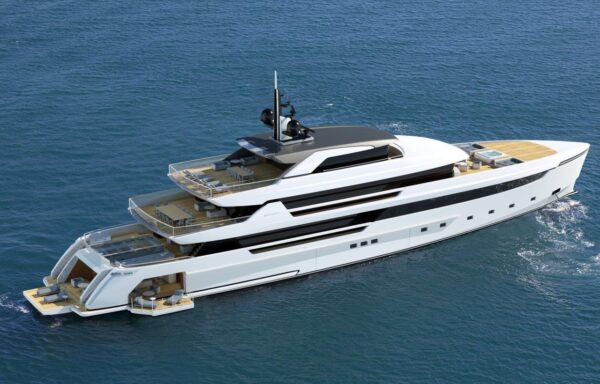 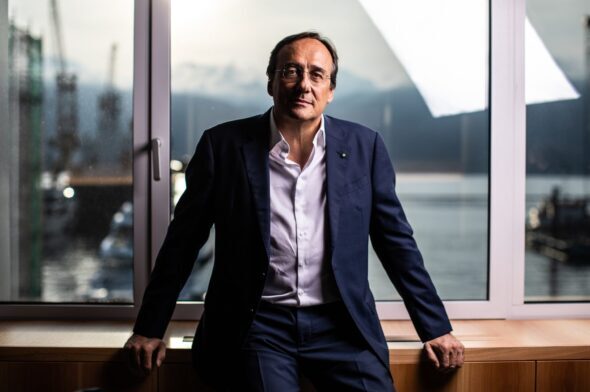 Sanlorenzo and Venice: boating, art and sustainability. The CEO Perotti talks to Daily Nautica: “This is our brand philosophy”

The CEO of Sanlorenzo Massimo Perotti talks to Daily Nautica: “We have 1 billion, 200 million in our order portfolio” 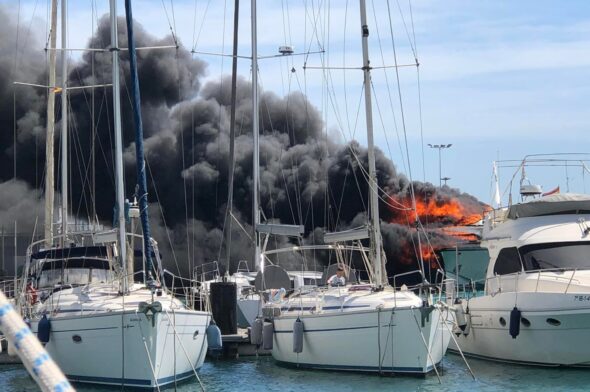 A fire has destroyed the megayacht “Pesa”, a 26.7 metre Sanlorenzo, while it was moored in the port of Valencia. After the fire the boat sank. The video 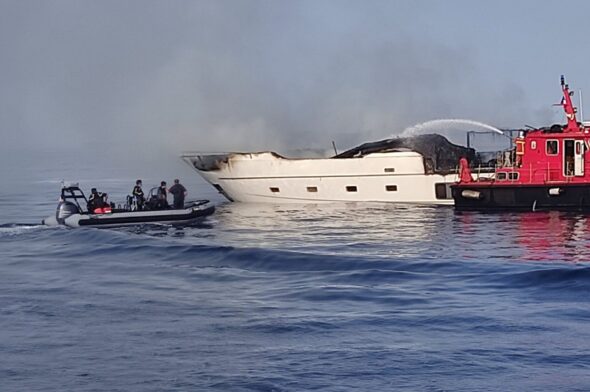 30-Metre Sanlorenzo yacht catches fire on the Cote d’Azur: it is the “Reine d’Azur”

The Reine d’Azure, a 29-metre Sanlorenzo SD96 built in 2019, has caught fire off the Cote d’Azur in France. The cause of the fire is still unknown 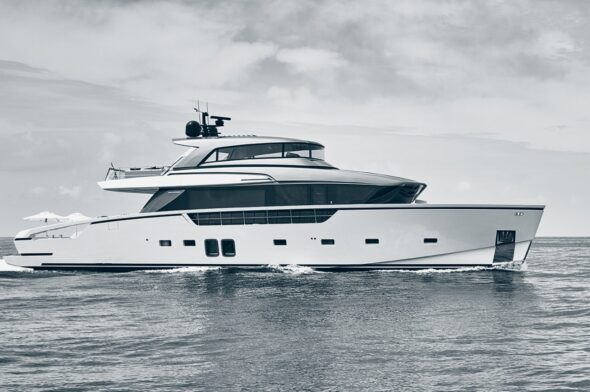 Valentino Rossi’s new yacht has been launched. The “Doctor” will sail on board a Sanlorenzo SX88

The utmost discretion regarding Valentino Rossi’s new yacht, launched in the Sanlorenzo shipyard in Ameglia, but it will only be ready in May. This is how much it cost 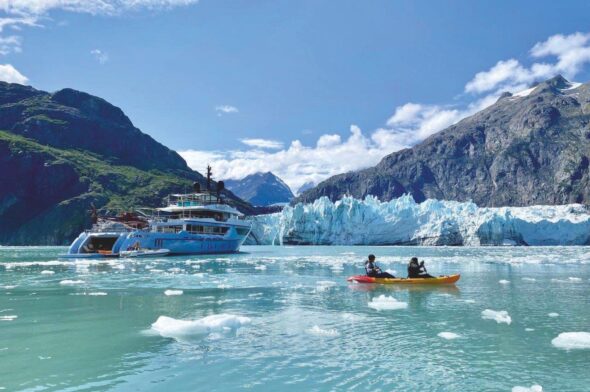 From Florida to Alaska: the adventure of the Sanlorenzo 500Exp superyacht in the land of ice

The owner of a Sanlorenzo 500Exp left from Florida to sail up to Alaska. The latest technology, large spaces on board and incomparable navigational equipment for a superyacht ready for anything 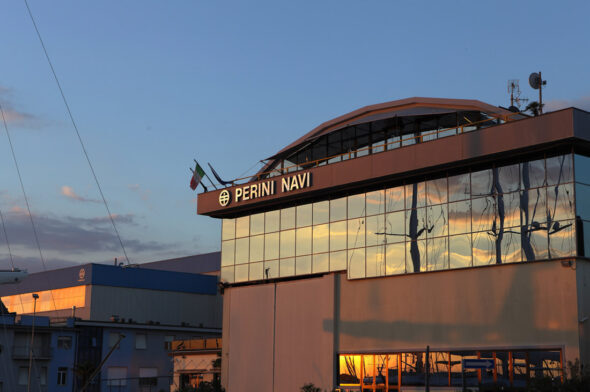 Historical alliance between Ferretti Group and Sanlorenzo to save Perini Navi

Ferretti Group and Sanlorenzo have announced the creation of a joint venture, NewCo, to acquire Perini Navi after the Lucca Tribunal declared it bankrupt