Daily Nautica » Mega yacht » Interview with Mascia Poma, captain of the Bleu De Nimes: “This is how I became the first female maxi yacht captain in the world”

Interview with Mascia Poma, captain of the Bleu De Nimes: “This is how I became the first female maxi yacht captain in the world”

Our interview with Mascia Poma, captain, for 15 years of the 72 metre maxi yacht and first woman to become a part of the Italian Yacht Masters Association

Mascia Poma, born in 1975, has been the captain of the maxi yacht Bleu De Nimes for 15 years, and is also the first woman to become a part of the exclusive association, Italian Yacht Masters, uniting all Italian superyacht captains.

Until 2010, Mascia was also the only woman in the world captaining a megayacht. A professional who has made the sea her home, and that of her family. Her 6 year old son has been with her on every assignment since he was born, as has her husband, who works as a technician on board.

Bleu De Nimes, which after a complex refit, is 72 metres long and is now one of the most famous passenger yachts around. Sharing with us the history and adventures of this particular megayacht, originally built as a warship by the Royal Navy, is Captain Poma, who we met on board for this exclusive interview.

Were you really the first female captain of a maxi yacht in the world?

As a matter of fact up until 2010 I was the only woman, but only if we are talking about boats 60 metres or longer, while, for smaller vessels I wasn’t the only one. Only 2% of those working in the maritime industry, including brokers, are women, and of this already small number only 0.2% are captains. It is therefore hard to find fellow female captains, but they are out there.

Can we then hazard a guess that at the moment you are the only female captain with her whole family on board?

Yes, I probably am the only one, and I am still trying to understand if this is the right decision. Initially, when my husband and I decided to have a family, I had quit, I wasn’t sure it was the best idea to raise a child on board because a captain needs to always be thinking about the crew, even in an emergency. For example, when we are in rough seas, my son knows he needs to stay in the cabin laying down because things can fall down and a child could hurt themselves. Quitting ended up just being an idea as the owner, a great sailor and lover of the sea, told me to keep my son on board, so we threw ourselves into this adventure and now it has been 6 years that we have been sailing all together. Now he has his very own tutor and we are homeschooling. And in the future? We’ll see…

Let’s take a step back to when Mascia was a young girl in Calasetta with her whole life ahead of her: did you already know you wanted to be a captain? Was this part of your plan?

My father was a fisherman, so I have always been attracted to the water, and growing up I knew I wanted to work in it somehow. I was young but I wanted to work at all costs. My parents pushed me to keep studying, but then they gave in and I began working seasonally, first in bars and then in the family boat, even though it was hard to convince my father who kept saying, “Never has there been a woman on board!”. In the end I worked with him for seven years every summer, from when school finished, increasing my frequency during university. The big change happened in 2000 when the Renzo Rosso’s Lady May came to Calasetta. At the time in the summer I was working on the tourist dinghies and we were on the Portolano. It just so happened that Rosso’s yacht had a problem on board, and so they called us and for me it was the first time I had ever stepped onto a yacht. I came home and said, “I want to do this and only this in my life,”, so in January 2001 I began looking for work on yachts.

You have already been the captain of the Bleu De Nimes for 15 years, a boat with a famous history. Did you already know it? How did it feel to take on this job?

This boat is home to me because I have been on board since 27 April 2007. Before this I had done some research to see which yacht owner in Italy sailed his boat the most, and Bleu De Nimes came up. I said to myself, “Well then, I will work for that owner,” and so it was. I began working here after four years. After it was decommissioned by the Royal Navy, the boat was purchased by that owner and taken to a shipyard in Turkey. There, they emptied it completely: it was just an empty shell and of the original things only three pumps in the engine room, the anchor hoist and stern hoists remain. From 2007 to 2011 the owner only used it with his family, then in 2011 he decided to use it as a charter. From here came the need to lengthen and modify her structurally. Bleu De Nimes has an incredible history, it is an exceptional vessel. At its foundation it is an explorer yacht, it has all the characteristics needed to sail anywhere, the hull plates (with 2% titanium) are 10, the keel is 12, it is a very robust vessel because of the work it did before: it was a degaussing vessel, which means it demagnetised submarines.

How many countries have you visited with the Bleu De Nimes?

When we went around the world with the owner we went to the Seychelles, Madagascar, Thailand, New Guinea, Salomon Island, the Marshall Islands, Australia and French Polynesia. With the charter the Indian Ocean is very popular: one year we went to Capo Verde even though ground logistics weren’t easy. If charters come to us the owner tries to send them over to the Indian Ocean. A marvellous experience was with the government of Mauritius because this year the Chagos Islands were returned to Mauritius after a territorial dispute with the English, and we helped the inhabitants of the island to return home after they had been relocated to Mauritius or the Seychelles for years so the US could use the island as a military base. 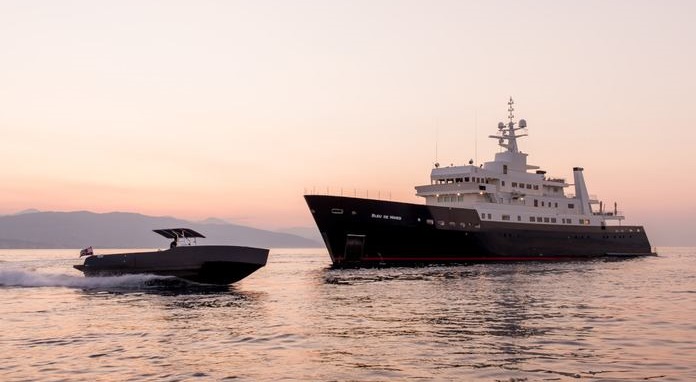 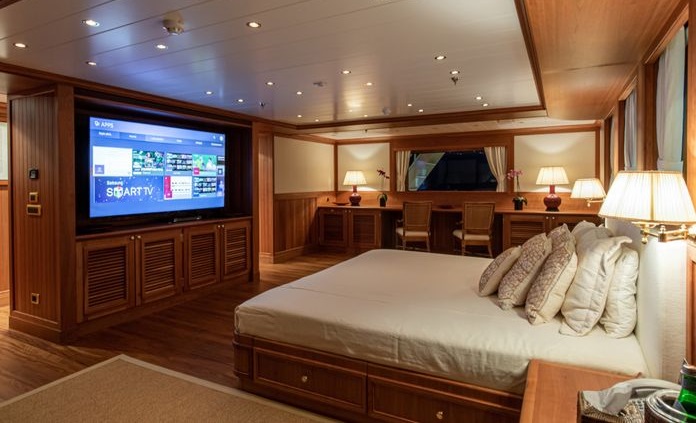 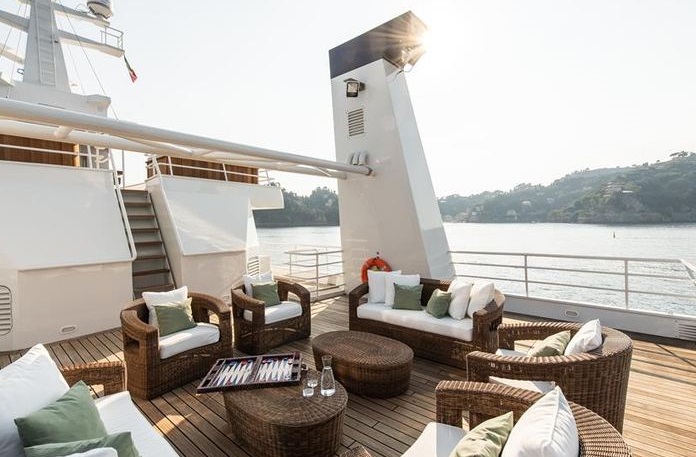 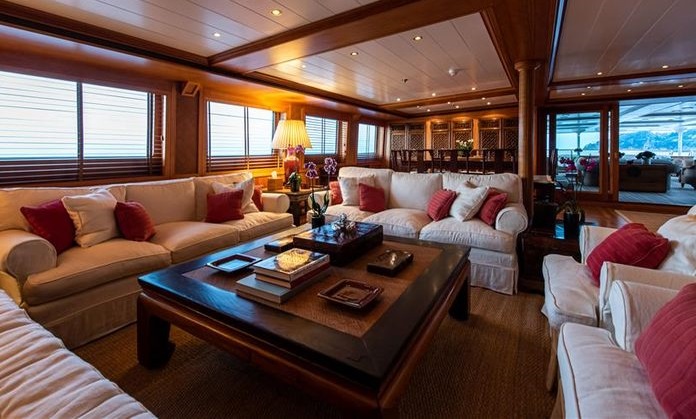 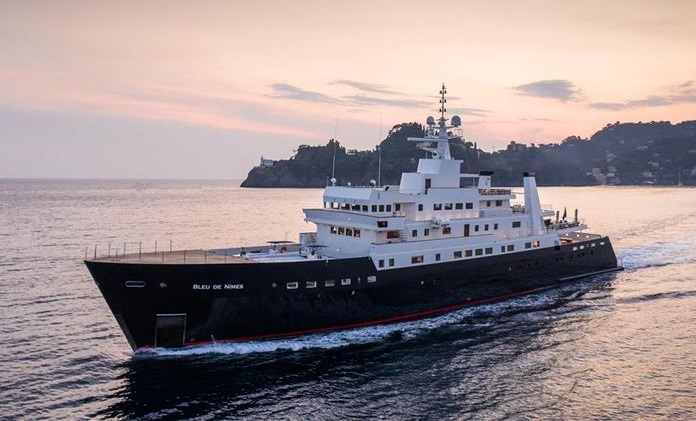 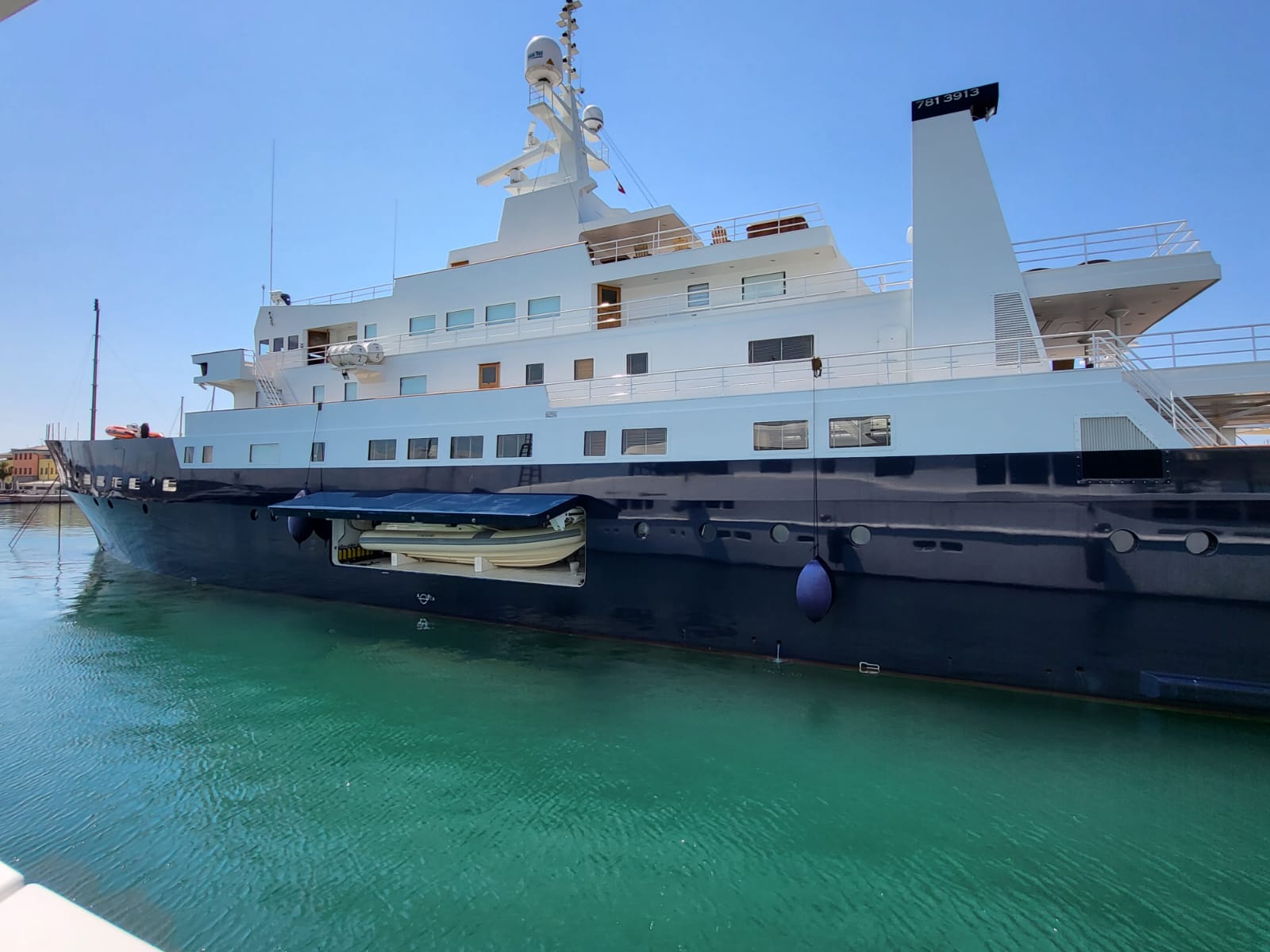 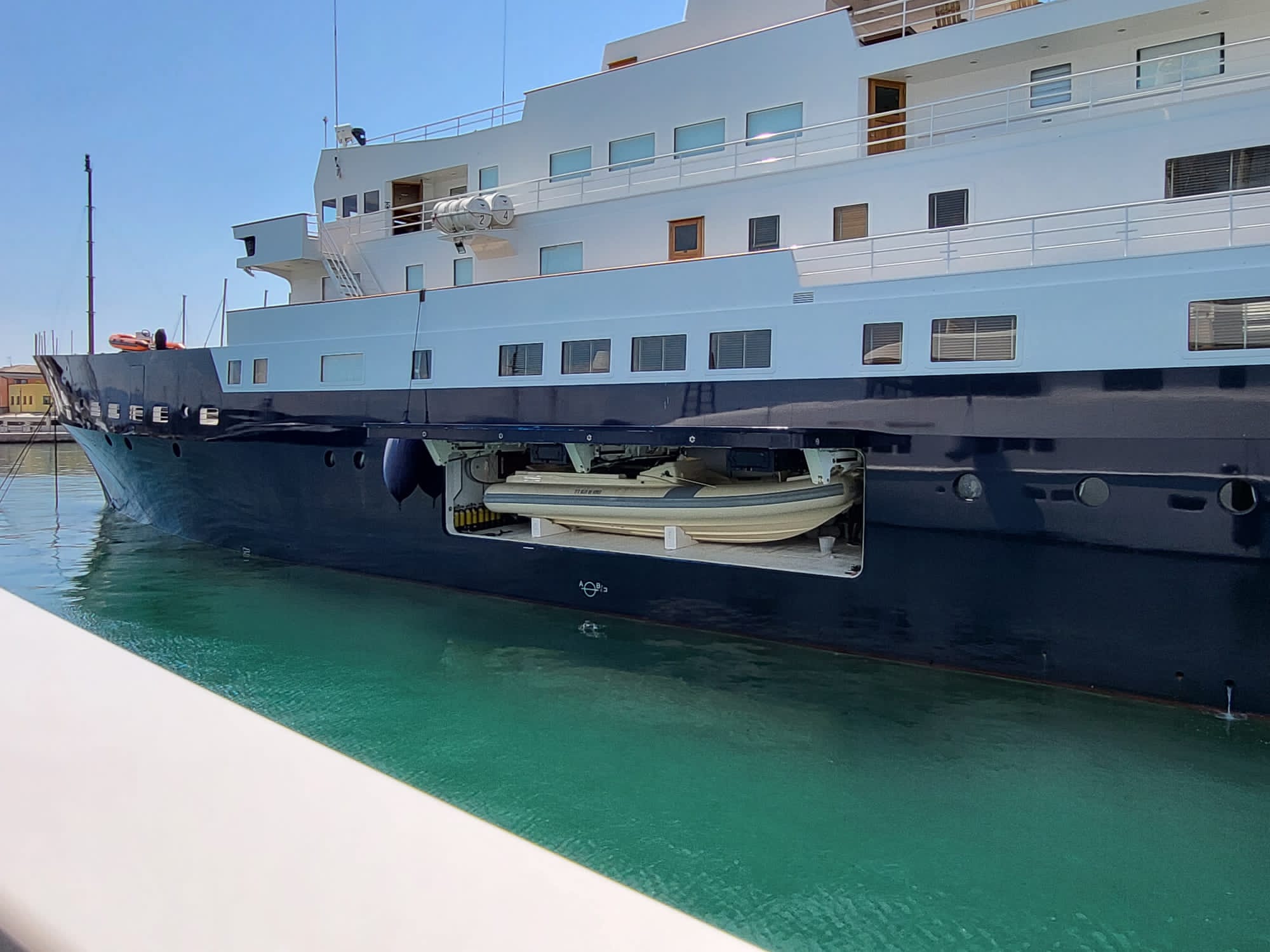 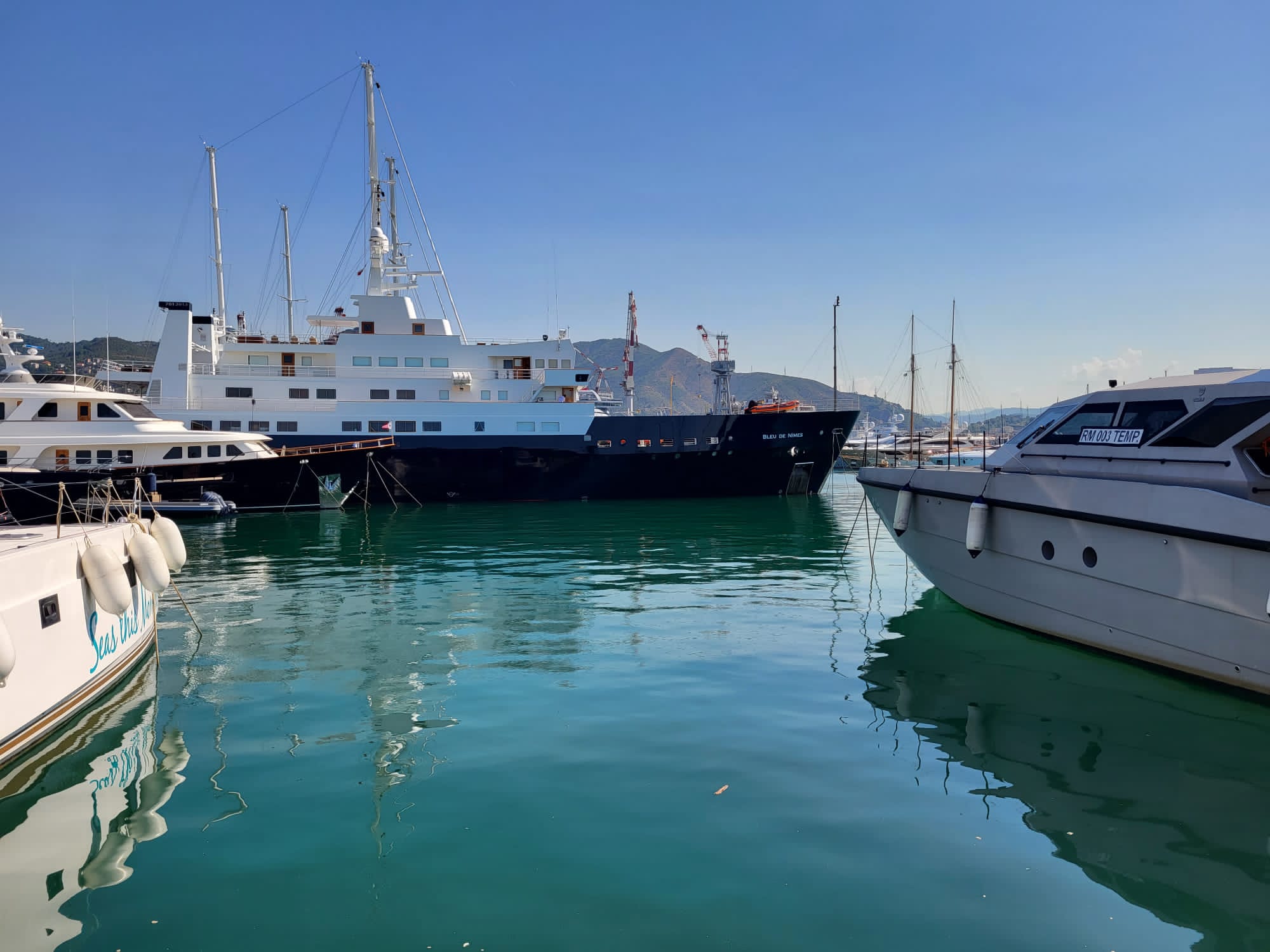 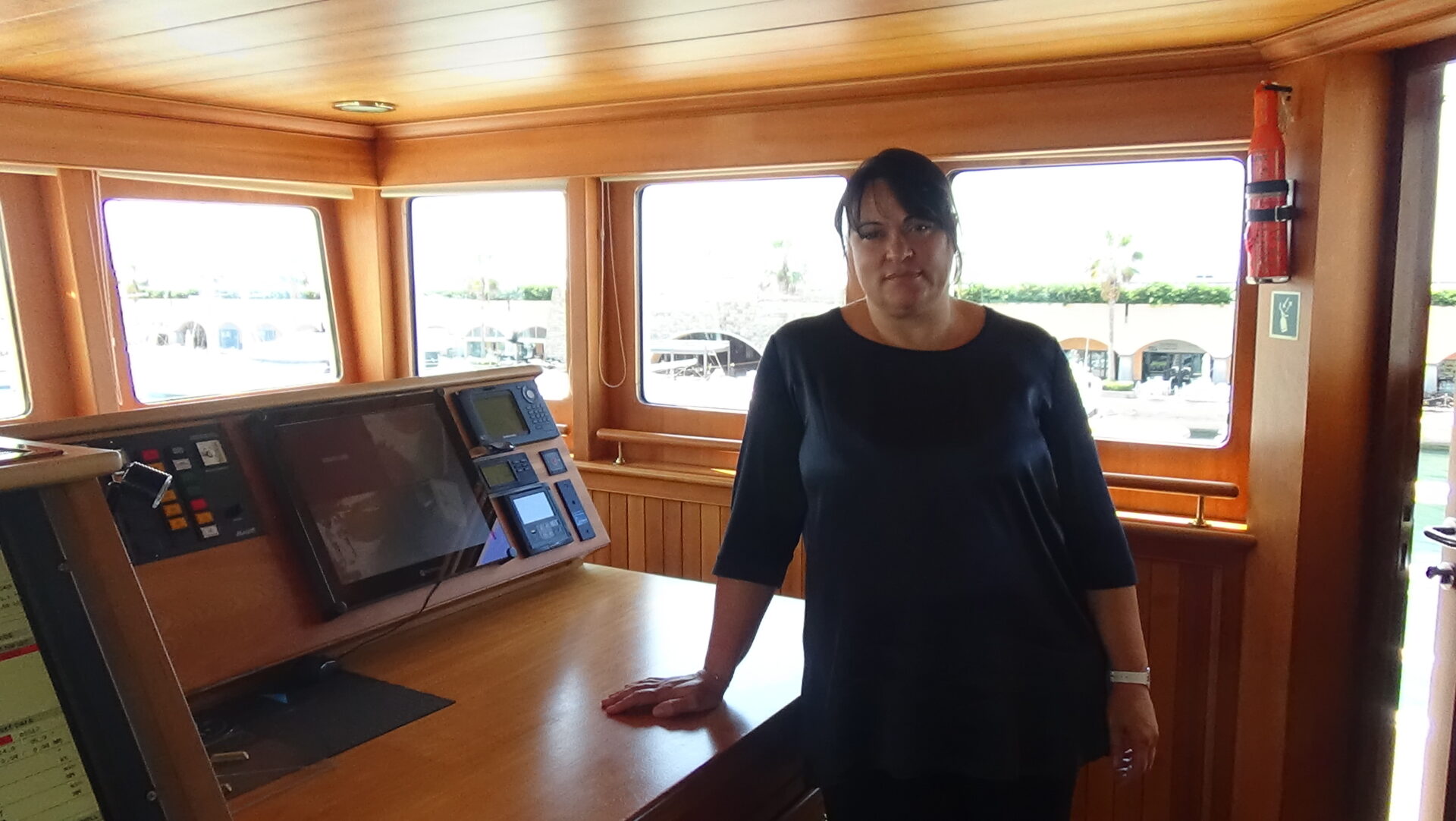 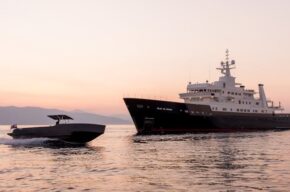 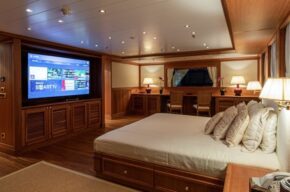 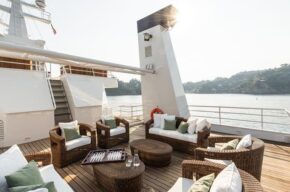 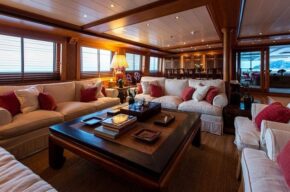 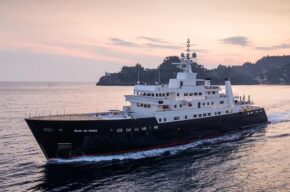 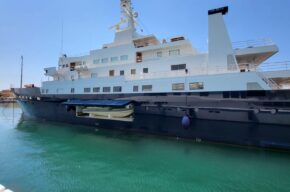 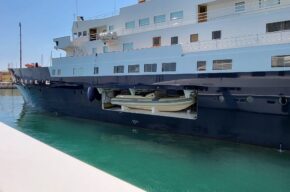 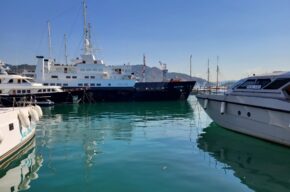 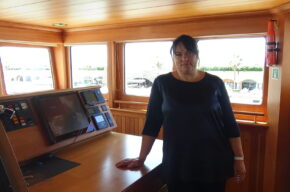 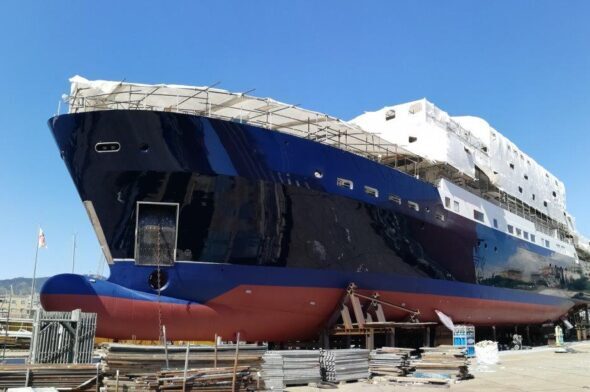 Bleu de Nimes, from warship to passenger yacht: her evolution from 1980 to today as told by Studio d’Ingegneria Navale Nattero

Studio Nattero in Genoa talks about the feat of engineering which led to the radical transformation of the megayacht, Bleu de Nimes, going from 55 to 72 metres to become an exclusive, luxury charter 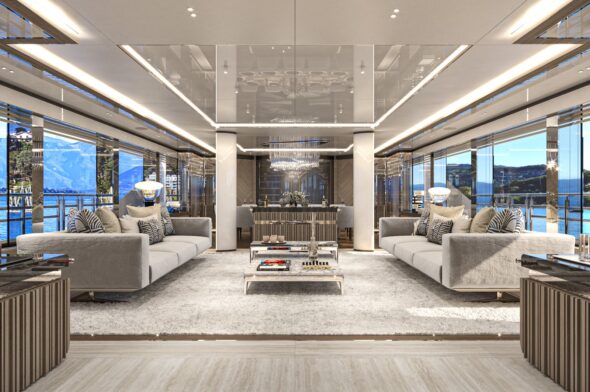 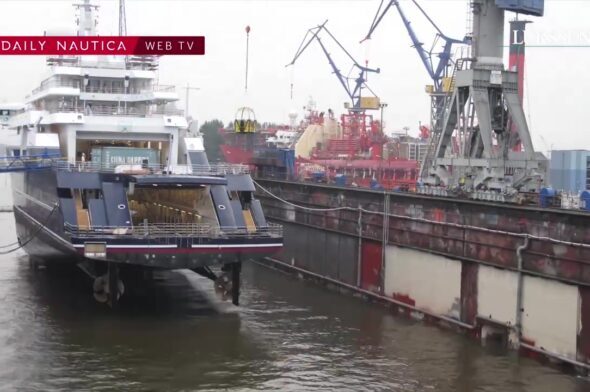 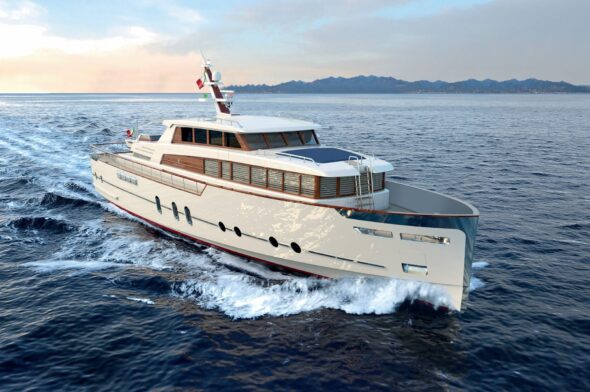