Bleu de Nimes, from warship to passenger yacht: her evolution from 1980 to today as told by Studio d’Ingegneria Navale Nattero

Studio Nattero in Genoa talks about the feat of engineering which led to the radical transformation of the megayacht, Bleu de Nimes, going from 55 to 72 metres to become an exclusive, luxury charter

It used to be a warship, and now it is one of the most famous passenger yachts out there, going from 55 to 72 metres in length after a series of radical transformations. This is the megayacht, Bleu de Nimes, the same one we encountered a few days ago as it was re-entering the port of Genoa (you can find the video in this article). It is currently cruising offering its passengers an exclusive and luxury sailing experience. Bleu de Nimes’s new “life”, is dedicated to chartering.

In addition to the beauty of this megayacht, what is striking is its long history and the many transformations it has undergone, many of which have taken place in the Genoese port. A good part of these transformations were proper feats of engineering, and were designed by Studio d’Ingegneria Navale Mario Nattero in Genoa. Among the many jobs undertaken ( the studio’s portfolio is notable), is the evolution of the Bleu de Nimes, which the studio started working on in 2014.

These are the main phases of history for this megayacht, as told by the person who designed her changes. The latest work has just been finished.

The motoryacht, Bleu de Nimes was built in 1980 in the English shipyard, Cleland Shipbuilding, to become a part of the Royal Navy Fleet, with the role of submarine support for the Navy, and then used as a minesweeper.

After a long period of disarmament, in 2001 the ship was purchased by its current owner and transformed into a pleasure yacht. The important transformation work was carried out in Turkey, based on the design of Studio PentaNed for the structure and systems and by the studio Architetto Pier Vittorio Cerruti for the design and styling of the interior.

In 2008, the notation was updated to commercial yacht and from that moment on, the vessel travelled around the world a number of times, from Greenland to the Pacific. In 2014, the owner, with the support of Studio Nattero in Genoa, then began to develop a new transformation project to lengthen and enhance the endowment of this particular explorer yacht.

The design project included the lengthening of the central body of the hull and superstructure, so as to be able to accommodate new garages for two of the ship’s tenders and increase the number of passenger cabins (going from 9 to 13, including the owner’s suite), allowing the number of passengers to be increased from 12 to 28.  During the transformation, the notation was changed from Commercial Yacht to Passenger Yacht. The new class was certified by the American Bureau of Shipping (ABS).

To update the lines of the hull to the top deck, the stern was completely redesigned, adding a beach club and a new, recognisable access staircase, bringing the overall hull extension to approximately 17 metres. The yacht was also modified with the addition of a new forward fin keel, which has much improved the performance in terms of speed and movement resistance.

The design of the new interiors was once again led by the architect, Cerruti, conferring to the interiors of the P/Y Bleu de Nimes a colonial inspired sober elegance, with large and comfortable rooms, without, however, penalising the harmony and elegance of the details.

The feat of engineering faced by Studio Nattero, to transform the 55m vessel into a 72m passenger yacht, included a detailed study of the structure and lines of the hull, which originally were not cylindrical for cutting and joining, as is usually the case with the larger cruise ships that undergo extension.

Through continuous verification using stability programs and FEM, it was possible to complete the extension project, during which sophisticated instrumentation was used for surveying, including a 3D laser scanner which allowed for the proper viewing of the original shapes, in particular for the work to the stern.

A further element of complexity in the design was tied to the manoeuvrability of the hull, which, during testing, was shown to have increased in speed and hold, giving the P/Y Bleu de Nimes a new look and character allowing the yacht to travel the world without limits, allowing for new and exclusive cruises. 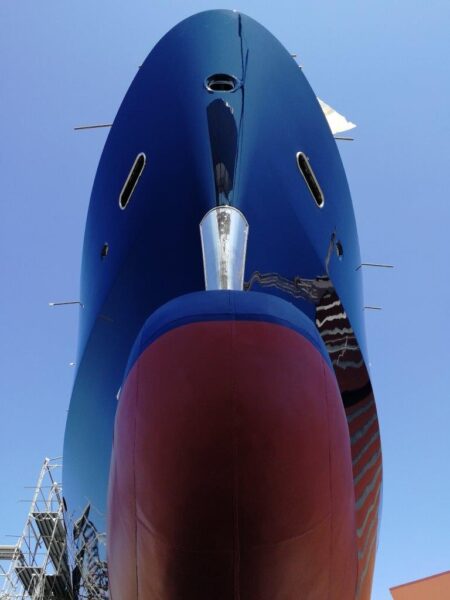 The new forward fin keel of the Bleu de Nimes