Ugo Salerno was born in Naples on 21 November 1953 and has been president of RINA Spa since 2012. In 2002 he was nominated Chief Executive Officer of RINA, founded in 1861 as a naval certification organisation and now the main company for certification and engineering consultancy in Italy.

After graduating with honours in Naval and Mechanical Engineering from the University of Naples, Ugo Salerno moved to work in Italcantieri Spa, a shipyard located in Genova Sestri. After about three years he took on the role of technical inspector at Fermar in Ravenna, a company specialised in dry bulk handling, to then become the technical manager.

In 1988 he returned to Genoa as manager of fleet operations for Bulkitalia, a company belonging to Gruppo Coeclerici. In the 14 years he spent in Coeclerici, he took on a number of roles, until, in 1996, he became the chief executive officer of Coeclerici Shipping, Coeclerici Logistics and vice president of Coeclerici Trading.

At the same time he was elected as a councillor for Standard P&I Club. From July 2003 to June 2004, he was president of the Associazione Internazionale delle Società di Classificazione (IACS). In 2008 he became a board member for ITIC P&I Club (International Transport Intermediaries Club Limited). From 2009 to March 2014 he took on the role of independent advisor for VSL.

He was a board member for Fondazione Ansaldo and from 2013 of the hospital “Ospedali Galliera” in Genoa. From that date until 2017 he was a part of the executive council for Confindustria Genova, with a mandate for the Infrastructures.

In May 2014 he became a member of IFIA (International Federation of Inspection Agencies), now known as TIC Council. In June 2013 he was nominated Cavaliere del Lavoro by the Republic of Italy. From June 2014 to March 2015 he was a member of the board of directors for Ucina-Gruppo Imprese di Servizi per il Diporto. In May 2015 he also became a general and confederal member of Confindustria.

Mr Salerno, why did you decide to study Naval Engineering? What was your ambition as a new graduate?

In truth, contrary to what it may seem, I was not a young man who already knew what I wanted to do, with a passion for naval design or a planned path I wanted to take.

My choice of studying Naval Engineering at university is maybe more tied to the personal memories that come from afar: the tours through the shipyards that I went on on Saturdays when I accompanied my father, who was also a naval engineer. Then I wanted to become a part of that international world, to think in global terms. An industry like the naval industry would perfectly bring together all these interests. So it was then natural for me to choose the Naval Engineering faculty in my home city, Naples.

How did you first come into contact with the sea and boating?

I would say that my encounter with the sea happened with my birth: I have always looked over the Gulf of Naples and the splendid Tyrrhenian Sea. I spent my summer holidays in Ischia until I grew up.

When I was a child I watched the ships being built, it was an industry that made me dream and reflect on the opportunities that it represented. And so my future became clearer, and I started working in Italcantieri, Ferruzzi, Coeclerici and finally in RINA. It was a long road, and there is still a ways to go, but the sea has certainly always been a constant.

Throughout your work history, there are a number of management roles in companies working in shipbuilding, shipping, or with the sea in some way and, under your management, RINA has a acquired a number of companies. Do you feel you are a man of business or of the sea?

I feel I am a determined man, with a passion for results and the desire to achieve them without getting lost along the way: these were the ingredients that led me to making the choices I made, and that make feel like both a business man and a man of the sea. Thinking it over, I have also been through risky changes and steps, but my courage and enthusiasm, and, obviously, a good dose of luck, have always been by my side.

Having management roles, and now managing RINA allows me to work on the strategic and management aspects of a company, on a project and its human capital. I am passionate about coordinating resources in reaching precise goals, creating a working environment where serenity and respect represent values of reference and motivation.

And still today this is the stimulus that is at the base of my work. It is truly a splendid challenge. This is my job and I love it. Just like I love the sea and its challenges. Often they are the same as the ones I find in my work.

Your professional career has led you to spending much of your life in Genoa. What is your relationship like with this city now?

I would say it is a symbiotic relationship, of great reciprocal respect and admiration, of partnership and growth. RINA really has this city to heart. In its history, Genoa has enjoyed a number of periods of prosperity: in 800 it was the first Italian industry, in 1200 it built the tallest lighthouse in the world, the Lanterna, and the Ponte Morandi, when it was built, was considered to be the most innovative in Italy.

Now Genoa needs to rediscover its pride and, with that, attract important and challenging initiatives. RINA is always available, together with the Council, to grow with the city and contribute to its improvement and success.

I can’t forget to proudly note the creation of the project, for Ponte Genova San Giorgio: I am proud to say that RINA was a knowledgeable overseer. Its opening was an event of great value for RINA and for all the partners who worked on it, but I believe that its importance is evident especially for the city and its people. Indeed, it is fundamental, now more than ever, to take part in stories of success and recovery like this.

What is your relationship like with the sea in your free time?

I adore the sea. As soon as I have a free minute, I immediately escape with my family to our sail boat. It is my way of recharging and relaxing.

Once I read something about the sea that I think expresses my thoughts perfectly: “The Sea, once it casts its spell, holds one in its net of wonder forever.” This was said by Jacques Cousteau, who knew a bit about the sea. I feel it completely: like I am in that net of wonder that only the sea can weave. And I like being there. 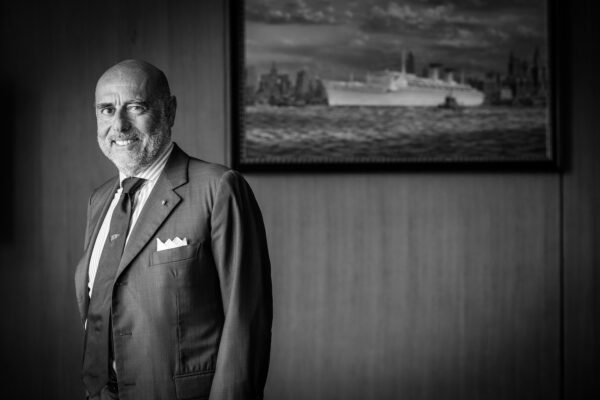