Alberto Cavanna is now a writer and artist. But he used to work in a number of shipyards. This is how his personal and work life has changed

Alberto Cavanna was born in Albisola Superiore on 24 August 1961. He is an Italian writer, translator and illustrator. After having been confirmed as company manager, he abandoned his previous work to work exclusively on his art. He still lives in Polverara, in the Municipality of  Riccò, a town overlooking the Gulf of La Spezia, in the lower Val di Vara.

Born into a family of artisans, working for generations in carpentry for boats and vessels, his father brought him with him to the “shop” since he was 5 years old, where he began alternating studying and working in the garages, in the ports of Savona and on board. From his grandfathers, both enlisted in the Italian Navy in the two World Wars, he inherited his love for the sea, and, from his father in particular, a love for sailing.

After his secondary school diploma he began working full time in the family business, which he left in 1988, to move to La Spezia, where he became the manager for a number of shipyards including  Valdettaro (known for its refitting of vintage vessels like the Pacha II owned by princess Caroline of Monaco) and the famous shipyard Riva di Sarnico, where he was production manager. He continued in the profession, working in other regions and abroad, for clients and architects, until 2000, when he definitively left the pleasure boating industry.  After a brief stint in military shipbuilding, he abandoned his old career in 2005.

All of Cavanna’s art, divided between writing, drawing and painting, has deep roots in the seafaring tradition he inherited and in work culture, in the profession, conceived, not only as a simple means of survival, but a moral code for life. Belonging to a family of artisans, dedicated to a complex and noble craft like woodworking, led him to gain a profoundly different professional knowledge (openly conflicting) from the present.

Alberto Cavanna, from manager to artist. What led you to making such a radical change?

The changes that came with the crisis. The crisis is like a war: the world will never be the same again. And what we have lived through, and are still experiencing, is a war that has taken away a precious commodity: work culture.

The dignity of a person who proudly says: “I am what I learned to do.” Leaving behind a trace of your work: that was the dream of immortality for many wise illiterates who I met in the shipyards and on the docks. And when shipbuilding no longer allowed me to do this, I began to talk about the past.

Two very different lifestyles but both tied together by the sea. Has changing the way of “working” with the sea also changed your passion or way of enjoying it?

No, not at all. Times changed, not I”, says the protagonist of a beautiful film by Peckinpah. The approach I take with my work is that of an artisan: writing a nice story, making a drawing, or painting is all the same to me.

When you think about one of your pieces dedicated to the sea, written or painted, what are the elements that must never be forgotten?

Effort and human dignity. Wisdom without culture was and is that baggage of the humanity I write about today, a world with too much culture and too little wisdom.

By changing profession, you also change the way you interact with the “public.” Are the owners you worked with in the shipyards, the readers of your books or the appraisers of your painting the hardest to work with?

Outside of writing and colours, what is your relationship with the sea?

Like every good Ligurian I look at the sea from a distance, from my ivory tower. I love going out with my boat, which is turning 100 this year, and is present in a number of my pieces: the Latin skiff, Bianca. And not just sailing around the Gulf of La Spezia, but also simply working on it, is, for me, contact that gives me the same excitement as a nice page, or a drawing that has turned out well: the freedom to be what I am doing as long as it is done well, independently from anyone else’s judgement. 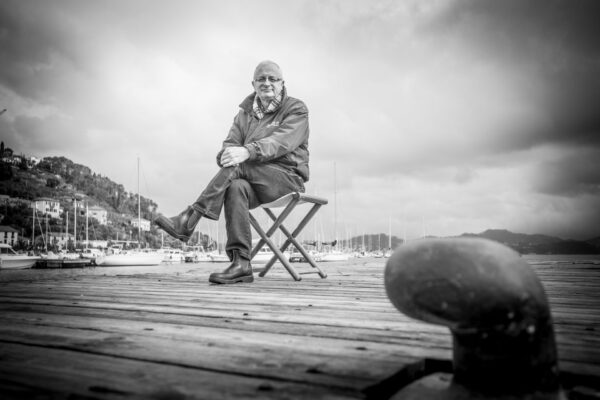 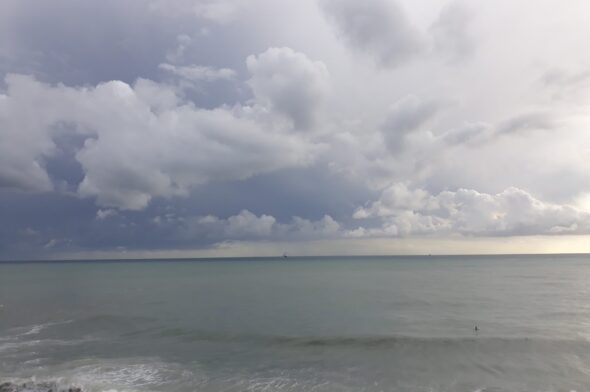