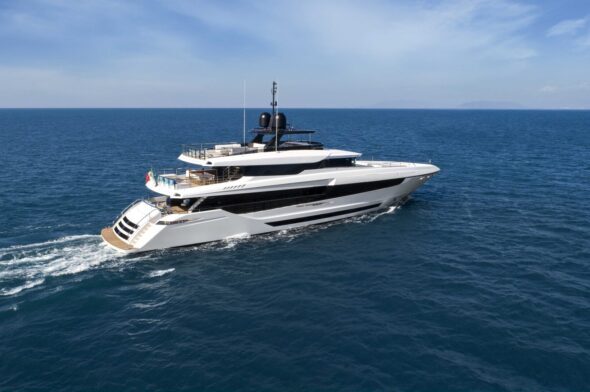 Overmarine Group has announced the sale of two new yachts belonging to the Mangusta Oceano and Mangusta GranSport ranges. “We are happy – explains Maurizio Balducci, chief executive officer for the Group – to have concluded this difficult year with the sale of two vessels, a Mangusta Oceano 43 and a Mangusta GranSport 33. Clients have recognised the quality of the product and the solidity of our shipyard, something which has allowed us to close these sales notwithstanding the difficulties of this time.”

Denominated, “Project Como” and the sixth unit in this series, the Mangusta Oceano 43 was sold in partnership with Gaston and Alex Lees-Buckley from the brokerage house, Camper & Nicholsons, who worked together with Francesca Ragnetti, sales manager for the Group. The sale of this vessel, which will remain in Europe, follows a few months after the previous unit, being sent to the American market.

The third unit of the Mangusta GranSport 33 series, called “Project Ponza”, was, instead, sold to a European owner in partnership with Christine Lavie from International Yacht Charter. “The owner – says Ivan Adzic, area manager for France and who managed the sale – had purchased a pre-owned Mangusta and, after just one season on board, decided to order a new one that he could customise according to his needs.”

The Mangusta Oceano 43 has an infinity pool to the bow and a beach club to the stern, with the hatch that, when opened, creates a platform on the sea, 45 m2 (484sq/ft) in size.  On the main deck is the large owner’s cabin, with an automatic balcony that can be autonomously opened and closed. On board, the key word is light: natural light that enters from the large windows and from the skylights and lighting design that pleasantly invades all the living spaces. With a cruising speed of 11 knots and a transatlantic autonomy of 4500 miles, this yacht can reach any destination. 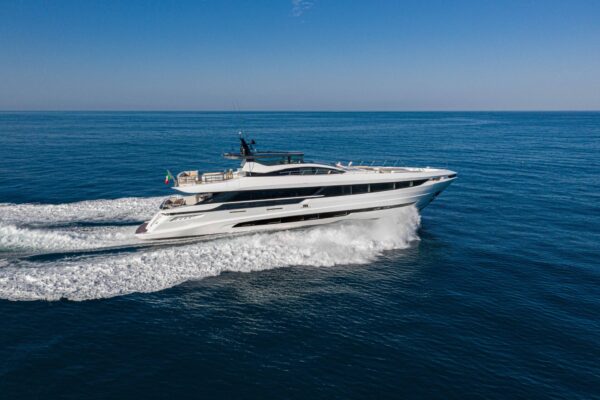 Entry level and part of the fast displacement line, the Mangusta GranSport 33 is equipped with an engine package made up of 4 Volvo Penta D13, 735kW (~1000HP)  engines coupled with 4 IPS pods that guarantee excellent efficiency, extraordinary manoeuvrability and the possibility of reaching a maximum speed of 26 knots while keeping high comfort levels on board.

The vessel is one of the best in its category in terms of space and volume, as demonstrated by the 40 m2 (132 sq/ft) owner’s suite on the main deck, where there is also the large living room with full length windows, two of which can be opened to let fresh air in. From the large 56 m2 (184 sq/ft) flybridge it is easy to reach the bow, which houses another social area, made up of a lounge and sun deck area equipped with a Jacuzzi pool.

The external design of both vessels is by Alberto Mancini, who worked in partnership with the technical department of Overmarine Group to create models with an elegant profile and a strong personality, with a perfect balance between the interior and exterior. The two units are currently under construction in the manufacturing facilities of the Group, the Mangusta Oceano 43 in Pisa (shipyard dedicated to manufacturing in steel and aluminium) and the Mangusta GranSport 33 in Viareggio, with the delivery for both planned for summer 2021.

Under the ownership of the Balducci family since it was founded, Overmarine Group is a company that has proudly made over 300 ships, of which 100 of over 30 metres. The group is in fourth place among the Italian shipyards, and among the top ten shipyards in the world, with 19 vessels under construction (of which 8 will be delivered in 2021) and an average length of 43.3 metres. The objective of the Group is to build vessels of the best quality, characterised by maximum comfort and capable of satisfying the needs and requirements of their clients.