The hull of the Seabourn Venture arrived in Genova, from Trieste, for its final fitting. It will be the first super luxury expedition yacht by the T. Mariotti shipyard.

The hull of the Seabourn Venture, the first super luxury expedition cruiser by the T. Mariotti shipyard, completed its transfer from Trieste to Genova on the morning of Saturday, 10 April. Towed by the tug boat, Sea Dream, the vessel will now begin its final fitting.

Waiting for her, alongside the chairman for T. Mariotti, Marco Bisagno, were the chief executive officer, Marco Ghiglione, the vice minister for Infrastructure and Sustainable Mobility, Alessandro Morelli, the president of Regione Liguria, Giovanni Toti, the mayor of Genova, Marco Bucci, the chairman of AdSP del Mar Ligure Occidentale, Paolo Emiliano Signorini, and the commander of the Genoa Port Authority, Admiral Nicola Carlone.

The hull, with its superstructure built up to deck 9 and now visible, was built in the Cimar shipyard in San Giorgio di Nogaro, in the province of Trieste, a now consolidated facility of T. Mariotti and Cimolai. After a delicate manoeuvre, the new ship, was floated on 30 March in Trieste, and then left for Genova, where it arrived in the morning of 10 April.

A voyage of 1200 miles which marks the beginning of a new phase: The Seabourn Venture, already equipped with engines, generators and the main equipment needed in the engine room, will complete its final fitting, with the integration of further superstructures, built in Genova over the last few months, and the installation of propulsion systems and its elegant interiors, making the ship one of a kind.

SHIPBUILDING TO RELAUNCH THE PORT OF GENOVA

“We are proud to welcome the hull of the Seabourn Venture – said Marco Bisagno, chairman for T. Mariotti – an important commission for Mariotti and the Genova Industrie Navali group. The awareness demonstrated by the institutions, who I thank for being here today, comforts us regarding the future of shipbuilding in Genova, an industry which provides jobs for many people. In addition, we hope that what we are currently discussing regarding the possible renewal of the fleet of Italian ferries will bring new commissions to the city.”

After a visit to the Genova Port Authority, the vice minister for Infrastructure, Alessandro Morelli, participated in a press conference at the T. Mariotti shipyard. “It is important – explained vice minister Morelli – to promote the many industries of the port of Genova. Its importance and role in the transport of goods is already well known but it is also important to highlight how important the hub is for shipbuilding, and for tourism, which will be further developed over the next few years; in the projects for the port we welcome infrastructures like the sea wall, as well as companies like this one.” 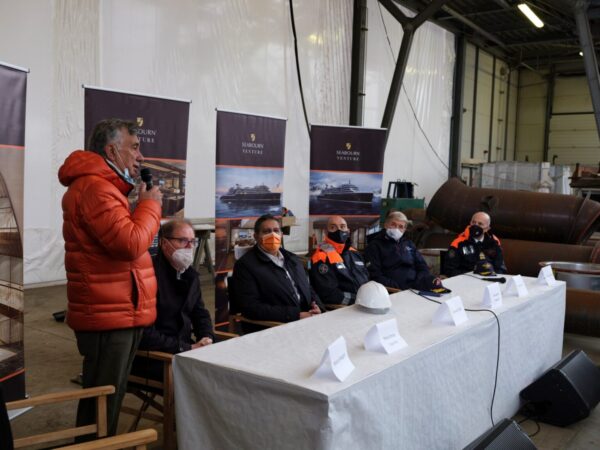 The press conference at the T. Mariotti shipyard

SEABOURN VENTURE’S SISTER SHIP IS ON HER WAY

The governor of Liguria, Giovanni Toti, spoke about tourism and travel. “Today is a positive day – noted the president of Regione Liguria – because Covid is slowly releasing its grip and letting us look to the future. While we are working to build a beautiful ship, and waiting for her sister ship to arrive in a few months, we can already imagine the boats in the water, a world starting up, and beginning to travel once again. Today we are also celebrating the incredible skill our city has in doing business, creating industry and above all, building ships to a high standard.”

The arrival of the hull of the Seabourn Venture coincides with the presence in the port of two units from the Seattle-based company, Seabourn, which arrived in Genova on the morning of 9 April to undergo maintenance by T. Mariotti, consolidating and confirming even more the continuing and long-lasting relationship between the two companies. Both vessels were built by T. Mariotti: Seabourn Sojourn in 2010 and Seabourn Quest in 2011, the first unit in the fleet to sail the Antarctic seas.

THE SEABOURN VENTURE, A SYMBOL OF SUPER LUXURY TRAVEL

The Seabourn Venture, designed and built for different environments, according to PC6 Polar Class standards, will be equipped with a variety of hardware and modern technology which will improve the capability and radius of the ship, including two submarines, custom built for a singular experience: seeing the world below the surface of the ocean.

In addition to 24 Zodiacs dinghies, allowing all passengers to go on excursions at once, the Seabourn Venture will also have 132 oceanfront veranda suites, guaranteeing the best in hospitality, no matter what the weather. In sum, Seabourn continues to be the symbol of super luxury travel, with intimate vessels and distinctive elements that characterise the brand: spacious suites, elegantly and individually decorated.