Genoa is becoming the boating capital: 369 million euro turnover in 2019. “But we need more space to attract suppliers and new vessels”

Meeting with international guests and members of Ligurian boating at Palazzo della Borsa. Toti and Bucci declare: “We have all the puzzle pieces we need to make Genoa the European capital of Mediterranean pleasure boating” 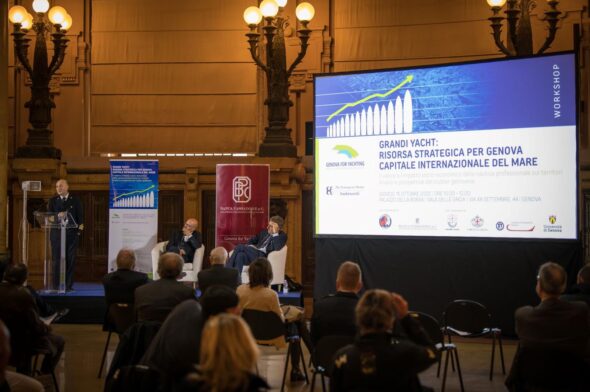 “Big yachts: a strategic resource for Genoa to become an international capital of the seas.” This is the title of the conference organised by the association, Genova For Yachting, on Thursday, 15 October at Palazzo della Borsa. A meeting which saw the participation of, among others, Richard Brisius, CEO of The Ocean Race, and Martin Redmayne, president of The Superyacht Group, centred on the economic impact of yachting and pleasure boating on the city of Genoa, both in terms of direct investment and satellite activities.

We have long discussed the (growing) statistics from 2019, but also of what the prospects are for the future. And by future, we do not just mean the arrival of the Ocean Race 2023 in Genoa, or the completion of the Waterfront works, but also the snapshot of a maritime Genoa in the next few years. “Genoa must become the capital of pleasure boating in the Mediterranean,” noted the mayor, Marco Bucci, connected by video call from the city hall in Palazzo Tursi.

“Genoa and the sea – added Giovanni Costaguta, president of Genova For Yachting – have always had a close, nearly symbiotic, relationship. Genoa is its port, where a number of businesses work together, alongside yachting. It so happens that the port and city look at each other with diffidence and Genova For Yachting was created to help others discover professional boating, the values of those working in it, the quality, professionalism and reliability of those that are a part of it”.

And it is the professionalism of the industry workers that was at the heart of the conference. “Here in Genoa – noted Costaguta – there are still a number of artisans, much appreciated for the work they do” but in other cities, “the professionals arrive attracted by the supplier warehouses. Not many suppliers and lots of space, whereas here it is the complete opposite: a lot of suppliers and very little space. We need this, and we also need modern infrastructure to help businesses take the next step”.

A STUDY OF PROFESSIONAL BOATING IN GENOA

The mark that yachting leaves, in economic terms, on the Genoese and Ligurian area is supplied by the study presented by the European House Ambrosetti. A study based on the 2019-2021 three year period.

The objective of the study was “Measuring and understanding the weight of the economic and social  impact and fallout of the professional boating sector in Genoa and identifying the related opportunities for the development of the city and surrounding area”. It was carried out following a precise method: collect data according to an econometric model to create other data.

All of this coming from looking through not only the finances of different companies, but also collecting information on expenses directly from crews, owners and their respective family members. In other words, the study went in depth on the interdependence of yachting and other local activities, creating a concise index (TEEI, Total Equivalent Economic Impact) capable of indicating, “the equivalent total economic impact” of its presence locally.

A proper snapshot of yachting and professional boating on Genoa is found in the Ambrosetti data, and it is quickly understood. It demonstrates how 2019 was the best year since 2008, in terms of yacht sales in the world: a shift that is estimated to bring the global fleet close to 5800 units by 2022.  The shares with the most growth are those covering vessels from 60/90 metres and over 90 metres. The biggest push is given by vessels in the 51/75 category.

Genoa, on its part, did not just stand there, and was able to take advantage of development opportunities. In 2019 alone, approximately 7000 people disembarked in Genoa, for a turnover, between direct and indirect investments, satellite and catalysed activities (crew expenses, owners and passengers of the boats) estimated to be 369 million euros (+8.5% compared to 2018) and an impact of 133 million euros of the regional GDP.

In particular, the turnover from professional boating in Genoa draws closer to the direct, indirect and satellite turnover of the Marine Terminals where cruise ships and ferries dock and depart (364-433 million euros) and overtake the takings of another regional speciality industry in company turnovers: the Ligurian floriculture industry (350 million).

How to respond to the competition coming from other European cities from Barcelona to the Cote d’Azur? The Ambrosetti study is clear: with infrastructure, local skill sets and innovation to offer sustainable solutions.

BUCCI AIMS FOR GENOA TO BE WORLD CAPITAL

“In this study – noted the mayor of Genoa, Marco Bucci – I noticed one opportunity above all the others: while we know that with large vessels, from 40/50 metres up, we have an elevated market share, I wouldn’t say the same goes for those between 15/24 metres, where, I believe, there is ample margin for improvement. Some parts of the port cannot be assigned to big yachts because there is insufficient space and there is no way to get them there, but this space can be used perfectly for these smaller vessels, especially when talking about the new piers we are building, giving the land back to the sea which we took away 100 years ago.”

“The blue economy – recalled the mayor – for us is strategic and the entire infrastructure both in the sea and on land (rail or road) creates a unique environment in Genoa, and leads to Europe. It needs to stay that way and as such it needs to be developed. We want this to become a strategic location, and Genoa must become the capital of pleasure boating in the Mediterranean, and since the Mediterranean has 70% of the vessels, it should become a world capital.”

TOTI: “YACHTING IS NOT JUST FOR THE RICH”

“A few days ago – added the governor for Liguria, Giovanni Toti – we concluded the only boat show held in the world and this happened in this city thanks to a collective effort. The boating industry puts a number of our cities on the front lines in Italy, and the world: I’m thinking of the area of La Spezia, or the renewal of the Porto Antico and the continuation of the Waterfront to the East”

“In the world of yachting – declared Toti – there is one of the highest multipliers (Editor’s Note: according to Ambrosetti, for 2019, it varied in Genoa from 2.5 and 3.1), after that of construction, but technologically more qualified and eco-compatible, but there is also a rooted and ancestral prejudice. And that is the idea – explained the Ligurian governor – that it is a ‘plaything for the rich’, so working on boats when the economy isn’t doing well seems to be a superfluous whim, if not something unpleasant considering everyone is suffering.”

“Behind those boats – concluded Toti – there isn’t a plaything for the rich, but a person investing his money in a giant opportunity, creating work for hundreds of workers, from qualified artisans to designers. It is a market we should focus on and build up a network in. Partnerships and networking are the key words for the economy of the future: no sector can grow independently from another. The same goes for yachts and for those who berth them, for the restaurants who feed their passengers, and for those who designed the innovative materials to make them even more beautiful.”