Articolo di Liguria Nautica
Daily Nautica » Tales from the Sea » The fritola venexiana. The queen of Carnival that comes from the sea

The fritola venexiana. The queen of Carnival that comes from the sea

From the east to the Venice lagoon, passing through Isola di Candia and Morea. The story of the fritter and its ingredients is the story of the Mediterranean

Ciacole, ombre, cicheti and fritole, it is said around the lagoon, are the breath of the city. For those living on the other side of the long bridge connecting Venice to the mainland, we are talking about Carnival fritters, glasses of wine, appetisers and other fritters. All products that are best enjoyed in good company, sitting in a bacaro, in a furatola or in a malvasia, to mention just three of the many names given by the Venetians to pubs. And carnival, which has come around yet again, is the best time to enjoy these specialities. One above all are the famous fritola venexiana which in the Eighteenth century, the golden century for the Serenissima, was crowned by no less than the Doge in person, the Queen of the Carnival, as well as official sweet of the Republic of San Marco.

A concession to the powerful corporation –now we would call it a lobby- of fritter makers, the only ones in those times that were allowed to fry the fritters and sell them to clients. An activity which takes place exclusively out in the open, behind wooden stands located between alleys and town squares. “Cooks and sellers of the past –wrote the historian Giovanni Marangoni– would work the flour on large tables and then fry it in oil, pig fat, or butter, in large pots supported on tripods. Once they were cooked, the fritters were displayed on varied and richly decorated plates, made of lead or pewter. On other plates, to demonstrate the goodness of the product, the ingredients used were showcased: pine nuts, raisins, citron”.

“Un bocon da siori e poareti”. A snack for both the rich and the poor. A sweet for all. Delicious but also cheap, which was perfect for a popular carnival like the one taking place in the Serenissima. A nibble that, like everything in this city, came from the sea and that, because of a rule imposed by the fritter-making corporation, could be no bigger than 4 centimetres.

The art of frying in oil came to Venice – and from here it would spread throughout Italy and Europe – from the Far East. The first to make a note of it was a historian and writer by the name of Jazla, a Christian who converted to Islam and lived in Baghdad in the Eleventh century. In one of his books, the academic wrote down a few Persian recipes including one for “zelabia”, which consisted in making a batter based on eggs and flour then throwing it by the spoonful into hot oil. It is not quite the Venetian fritter but it is close. 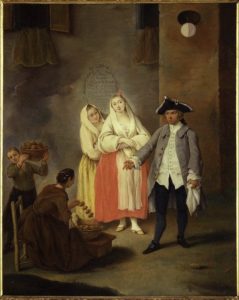 Jazla’s recipe reached Venice from the south, a century later, thanks to the translation into Latin by a Jewish academic. From the sea, in the meantime, the ships of Venice brought other treasures. The ships launched to accompany the army of Pope Innocent III on the Fourth Crusade, came back home with their cargo holds full of pine nuts and sultanas, as well as gold and silver ransacked from here and there. From Candia, which is what the beautiful island of Crete was called, not only did the candied fruit used by the Milanese to make their panettone come, but also sugar which was set to replace honey as a sweetener across Europe.

Now all the ingredients have arrived. Ladies and gentlemen, the fritola venexjana is served! Have it with a good glass of sweet malvasia wine that the Republic’s ships loaded from the city of the same name located on the extremity of Morea, the peninsula we now call the Peloponnese.

The first book mentioning the “fritola” is an anonymous text from 1300, written in Venice, but now kept in Rome on the shelves of the Biblioteca Nazionale Canatense, and is still one of the oldest books on gastronomy. From this century on, the fritola in Venice became like one of those relatives you don’t see every day, but who always make an appearance during the holidays. Goldoni writes of it in Campiello, Longhi paints it in one of his works kept in Ca’ Rezzonico. In short, it pops up here and there throughout the entire history of the city.

And like all good things, in addition to making any good intentions for dieting vanish, the original recipe has been changed over time and has a number of variants. So many that it is impossible to establish which sweet can now claim to be the “traditional fritola venexiana”. The Jews of Venice make their own version during Purim celebrations. Other versions, quite popular during Carnival, and that you can find all over the city, are filled with cream or zabaione.

If you want to try the art of fritter making in your own home, the internet is full of recipes including one by Liguria Nautica. If to the batter described you add pine nuts and raisins, it becomes the sweet that in the carefree days of the Carnival can be enjoyed by all the masked visitors.