Namibia and its mysterious coast full of half-buried shipwrecks

Are you excited about exploring a shipwreck but aren’t an expert scuba diver? In this case, you need to go to the Skeleton Coast in Namibia. This incredible part of the Atlantic coast covering the Namib desert to the great Orange River, is home to hundreds and hundreds of beached shipwrecks: cargo transports, military corvettes, large merchant ships, glorious sail boats and much more.

The Skeleton Coast is a spectral cemetery of ships half covered by the desert sands, with their bows still stubbornly poking out of the dunes, as if they wanted to continue sailing through that infinite ocean of sand. Just like in the oceans, the shipwrecks of the Skeleton Coast are not easy to find.

Yes there are hundreds – still today we do not have a precise number – but it is also true that they are spread over a completely desert area as large as Sicily and Sardinia put together. And just like the oceans hide their treasure in the most inaccessible depths, the Skeleton Coast hides its shipwrecks, covering them with its sands, swallowing them forever.

The thing that most surprises the rare visitors who explore these ships, is their distance from the coast. They aren’t simply beached ships, with part of the hull still in the water, as can be found along coastlines throughout the world. Many of these vessels are 500 or 600 metres away from the water. In some cases, even kilometres away. This incredible coast is undergoing an incredible phenomenon of continuing and unstoppable advancement to the ocean. The unceasing winds beating down on the coast push the sand dunes towards the ocean, sadly well-known among sailors for its dangerous and unpredictable labyrinth of underwater sandbanks.

In only a few years, the ships grounded in the sandbanks are ruthlessly engulfed by the desert, creating the truly alien effect of shipwreck on a sandy floor but with no water above. One of the most famous ships of the Skeleton Coast, the Eduard Bohlen, wrecked in 1909, is now around half a kilometre away from the sea. And it continues moving, slowly but inexorably, towards the desert. 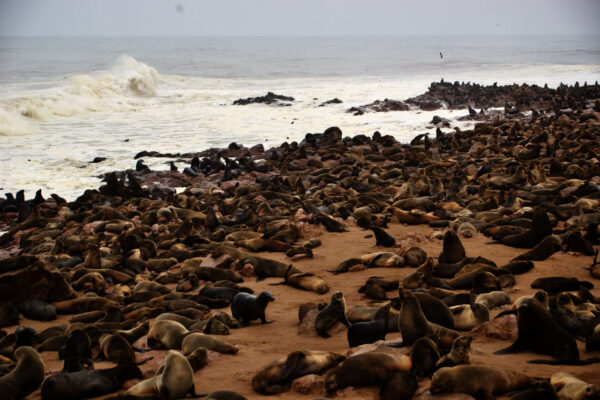 The Skeleton Coast is a paradise for seals!

The reason this part of the coast is so dangerous, is explained by the writer, John Henry Marsh, who wrote a number of books on some of the most famous shipwrecks in the world. It is Marsh who gave this part of the coastline the name of Skeleton Coast. Indeed, this area is a concentration of all the dangers feared most by sailors: the continuously changing sandbanks previously mentioned, the large waves caused by the Benguela current hitting the coast perpendicularly, the strong winds, bringing in unpredictable and violent storms. What’s more, when the wind drops, the “cassimbo” falls along the Skeleton Coast, the thick ocean fog that makes it impossible to see two metres ahead.

It is no wonder, therefore, that the Skeleton Coast is a graveyard for ships. Portuguese sailors marked this area on their maps as “as areias do Inferno”, the sands of Hell. Even the local San people were wary of approaching that coast that they called, “the land God created that time He was angry”.

As hostile to humans as it is to boats, the coast is, instead, heaven for seals and many species of marine birds. Along these beaches, I ran into one of the biggest seal colonies I have ever seen in my life. Kilometres and kilometres of these adorable and somewhat smelly animals, loafing in the sun, completely indifferent to me trying to walk over them, laying one on top of the other like sunbathers on a crowded Adriatic beach.