Speed and safety at sea.

A planing boat is synonymous with speed and this, in navigation, is in many ways a real safety factor.
Navigating on a fast boat means being able to complete your route in a short time, depart with favourable conditions and anticipate a possible worsening of weather and sea conditions.

So far so good, but this is a very incomplete and not very expert interpretation of the real problems that those who sail on a powerboat need to take into consideration.
Let’s look together, simply, at some important points to understand when speed, from a meteorological navigation point of view, is a favourable factor and when instead it can represent a critical element. 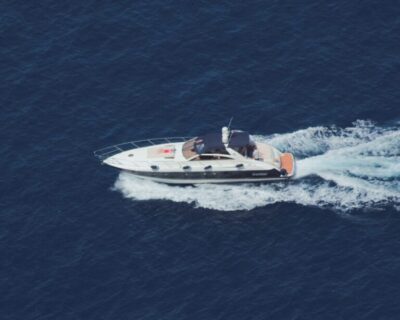 Powerboats can, depending on their characteristics and performance (size, hull, propulsion, autonomy), maintain a high average cruise speed of around or above 20 knots in the open sea.

To give an example, this means being able to cover the crossing from Genoa to Calvi, in Corsica, in just under six hours, or crossing the Adriatic from Pescara to the Island of Vis in Croatia, in about 8 hours.

Planing boats can therefore move over large distances very quickly, from one meteorological area to another, covering very different weather conditions in just a few hours.
For example, you can drop your moorings in an area of light winds and calm sea and then find yourself, unexpectedly, in an area beaten by strong winds and very rough seas.
Referring to the route in the example, on the same day it often happens that marine weather conditions on the Gulf of Genoa are very different from those present in the Capo Corso area.

Understanding the moment to change course.

There is sometimes a scarce predisposition, especially on the part of less experienced boaters, to consider that even a planing boat can be surprised by a sudden change in marine weather conditions or, and this happens more frequently, that conditions can be very different in two areas crossed by the same route.
Even more rare, in planning navigation aboard a motoryacht, is the evaluation of an alternative route that allows  to reach a shelter zone when the wind and sea conditions become too difficult on the original planned route
In practice it is often believed that the marine weather situation will remain almost unchanged along the entire route. These somewhat overly approximate assessments derive mostly from a lack of knowledge on Mediterranean meteorology, from an overestimation of the accuracy of the forecasts and sometimes from the underestimation of some important navigation problems in part due to a little inexperience. 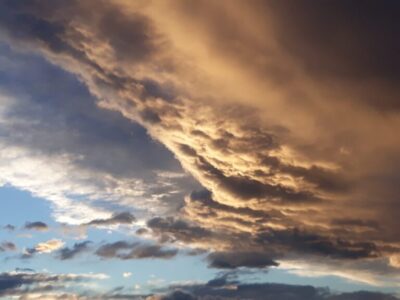 Given that each boat has its own characteristics that make it more or less marine, it is generally observed that a planing boat is really fast and proceeds well with “good” sea, almost calm or rippled, but if the sea is choppy or rough and the waves are against the boat, things complicate considerably. If the wind and the sea rise in the bow and are against the route, starting from slight seas (force 3 according to the Douglas scale of the sea state, with a wave between 0.5 and 1.25 meters) the powerboat will be forced to reduce its pace in order not to “hit” the waves and not to excessively stress the structures, greatly complicating the comfort of the guests on board. 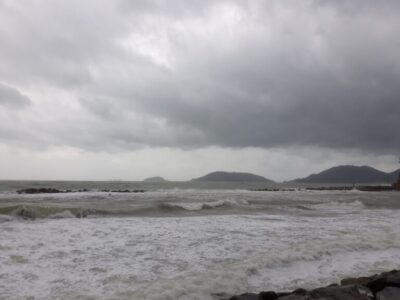 Navigation begins to get challenging.

In addition to navigational safety, a good captain tries to limit the discomfort on board as much as possible for the entire crew. He tries to softly “pass” the crests, the spray and the waves that sometimes reduce visibility. Furthermore, with waves at the bow, fuel consumption increases considerably and naturally also the estimated time of navigation.

We have therefore seen that, in a situation like the one described here, the “scenario” of navigation can change rapidly.
Of course, the example  is also valid in the positive, when the navigation conditions improve faster than announced. However, it should not be underestimated that all that is needed for a rough sea, like in the example, a moderate wind of about fifteen knots (force 4 of the Beaufort scale) is sufficient to generate discomfort. What if the winds were stronger and the sea state higher?
The apparent wind, if opposite to the course, is given by the sum of the real wind with the wind of the boat speed which is why on board, if you proceed at 14 knots and the real wind is 15 knots, on deck, the wind will be at about 30 knots …
Of course, if you are sailing close to the coast and with nearby shelters you can always find a good port or a protected bay, but if you are in the open sea you will still have to decide how to manage the remaining distance. 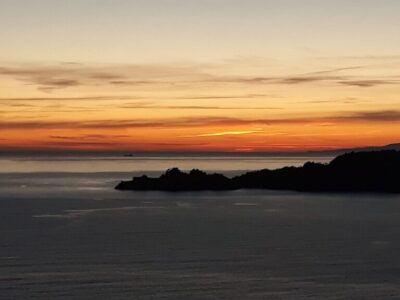 At this point I think it is useful to outline some of the most important points:

1. It is crucial to be updated on the current and forecasted weather and sea conditions on the route plotted, being able to count as far as possible on observed weather data and on bulletins also relating to the destination area.

2. It should not be taken for granted that the good sea at the moment of departure will remain like this for the entire navigation. The captain, crew and guests must also be aware of this.

3. Especially during a long passage , a forecast of headwinds, even if of moderate intensity, should be considered “critical”. You must always consider reducing speed and, when necessary, to decide on a change of course that allows you to reach a shelter with more favourable navigation.

4. The difficulties of entering a port must be studied in certain weather conditions

5. The critical winds for that port or anchorage must be checked on the pilot book.

5. It is necessary to estimate the hours of navigation and fuel consumption in case of weather that is more demanding than expected.

6. With the wind and the sea blowing towards the coast, it is good to travel a good distance from the coast.

7. Navigation near the coasts must always be at a safe speed.

In conclusion, the principle that speed is a safety factor in motor navigation remains valid as long as it is considered that the speed itself requires a more accurate assessment of the weather conditions during navigation and also when manoeuvring, or in case of poor visibility.

This is why I ‘m perplexed when, for example, I hear too confidently that: